A Must-Read: Dr. James Rota’s Mirror of the Body 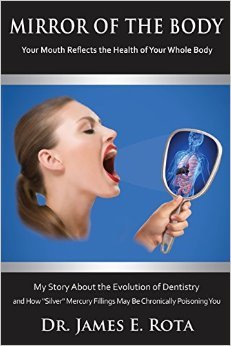 While it’s probable that a dentist will place more foreign material in your body than any other medical practitioner, it’s rare to hear an honest accounting about the practice of doing so. 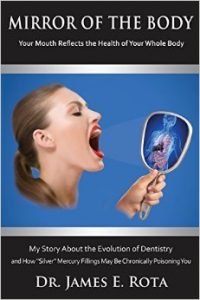 Perhaps that’s what makes Dr. James Rota’s Mirror of the Body such an intriguing book. While on one hand a memoir of the doctor’s 50 year career, it’s also a conversation with the reader about the potential dangers of turning your health over to someone else.

Mirror of the Body follows the evolution of Rota’s “allopathic” dental practice – which he summarizes as drilling, filling and billing, “with little thought of or curiosity about the short- or long-term impact of the procedure or dental materials on the patient’s health” – to his decision to practice biological dentistry.

This change was initiated in 1985, when protesters outside a dental convention handed him a brochure on mercury’s toxicity. When he read it, he got his first inkling that mercury, so commonly – and casually – placed in the dental office, could prove problematic.

Even then, he didn’t really believe it. After all, in addition to his practice, he was an Assistant Clinical Director at UCLA Dental School, teaching students how to place “silver” fillings. It wasn’t until he faced his own health crisis that he truly began to scratch the surface of mercury toxicity in dentistry.

In reading about Rota’s search for answers, we get a glimpse of how difficult it was for him to discover the harmful potential of mercury that he himself had placed into patient’s mouths. As readers, we follow the story and cannot help but feel astounded at not only the potential for harm but also the lack of information patients receive that addresses that potential.

It’s what Rota discovers along the way that leads him to biological dentistry.

Biological dentistry is an idea or process of dentistry that endeavors to utilize non-toxic material in the restoration of the mouth and focuses on the unrecognized impact that dental toxins and hidden dental infections may have on overall health.

Though Rota no longer practices dentistry, his is a voice that, like the canary in a mine, is a signal to the reader – a warning that we often completely entrust dentists to tip the chair back for treatment without being informed about any potential consequences. Most of us still don’t know that “silver” fillings are actually mercury amalgam fillings: about 50% mercury plus a slurry made of silver, tin, copper and zinc. Getting one of those little “silver” fillings means toxic mercury is placed inches from our brains. Rota believes we have a right to know about and question that practice.

What is perhaps most interesting in reading Mirror of the Body is how we got here in the first place. One typically hears of mercury’s safety in reference to its 150+ year history of placement. But Rota tracks the lack of scientific evidence that supports its actual safety. Mercury, it appears, has been grandfathered in, with little scientific research and even less concern as to the effect it may have on its recipient.

Compounding this issue, and further stacking the deck, is that state dental examining boards placed “gag” orders on doctors who dared to discuss safety concerns with patients and followed through with litigation against those who did. We also learn that dental associations held a vested interest in promoting mercury amalgam fillings because they held the patent on the process.

And yet, truth has a way of rising to the surface. Several countries have banned the placement of mercury in teeth completely. In the US, however, mercury still remains a political hot button.

But the real reason to read this book is because when we try to be an advocate for our own health, we often find ourselves adrift in an sea of information. All too often wisdom is drowned out by the sheer volume of information. With Mirror of the Body, we get the chance to read something special written by someone whose wisdom is based on the convergence of experience, curiosity, and consciousness about its impact on another human being.

Mirror of the Body feels like advice we can trust. At the very least, it gives you something to consider before you find yourself being tipped back in a dental chair. After all, what happens there should be up to us.