For some of us, when it comes to coffee, we can’t get enough.

Sure, coffee is one of those beverages that goes in and out of favor with regard to health. Just within the past week, we’ve been told that parents’ coffee consumption may raise risk of miscarriage and that as many as 5 cups a day may deliver a variety of health benefits. As with so many “it” foods of the moment, there may be as many reasons to loathe it as there are to love it.

But most of the time, you hear only about its effects on overall or systemic health. What about your oral health?

Recently, a new meta-analysis looked at coffee’s effect on oral cancer. Its authors analyzed 11 case-control studies and four cohort studies involving 2,832,706 controls and 5021 cancer cases. Overall, it appeared that coffee does have a protective benefit. Heavy users showed a 37% reduction of oral cancer risk compared to those who drank little or no coffee.

Though the authors note some significant limitations to their findings – including study design and bias – their work does jibe with earlier research.

And it’s not all that surprising, really. After all, coffee is a rich source of antioxidants. Antioxidants keep free radicals in check and keep them from damaging other cells. In fact, per serving, coffee offers more antioxidants than broccoli, blueberries, oranges, and other antioxidant powerhouses.

It also has four times as many polyphenols as green tea. You can thank its tannins for that. These polyphenols offer micronutrients that not only play a role in preventing cancer and heart disease but inhibit plaque-producing bacteria on teeth.

Of course, coffee has its downside, as well. For instance, its dark hue may stain your teeth over time. Because coffee lingers on your tongue, it may give you bad breath. Its acidity may weaken tooth enamel. 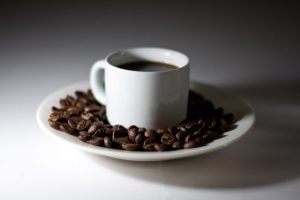 And bear in mind: All of the studies showing coffee’s benefit used black caffeinated coffee only. No sugar. No milk. No cream. No flavors. Most were done with levels of consumption up to three cups a day. Several studies noted that drinking more than this may actually be more harmful than helpful.

So when it comes to reaching for your cup of Joe, it might be best to remember the basic principle of toxicology credited to Paracelsus: “All things are poison and nothing is without poison; only the dose makes a thing not poison.” This principle has been reduced to an adage worth repeating like a mantra: “The dose makes the poison.”

Especially when drinking a mildly addicting beverage such as coffee.