“I’d Rather Have a Root Canal Than…” 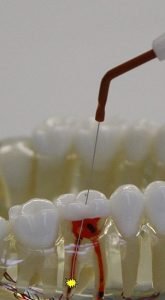 It may be the most popular cliché for emphasizing something you don’t want to do: “I’d rather have a root canal than….” You even see pollsters use it in their questions – such as last year’s survey which found that Congress is even more unpopular than the procedure (by 24%)!

A more recent – and appropriately holiday-focused – poll by a shopping app called Gamelt found that 33% of Americans would rather have a root canal than deal with the hassles and stress of holiday shopping (at least if we had to do it “every day for a prolonged period of time”).

At least one blogger might suggest that those 33% have no idea how horrible root canal therapy (RCT) can be – not so much due to the procedure itself as just a long, early morning in the dental chair. As many an endodontist – root canal specialist – will tell you, RCT doesn’t hurt. (The diseased tooth is a different story.)

But there are good reasons why it might be less than desirable.

Teeth that are candidates for RCT are deeply diseased. Endodontic treatment involves removing the pulp – the living part of the tooth – cleaning out the canals, then filling them and sealing off the tooth. The tooth is no longer living; still, it is considered “saved.”

Disinfection is one of the big challenges of RCT. The pulp chamber is surrounded by the approximately 3 miles of microscopic tubules that make up the dentin. These tubules make great harbors for oral pathogens (disease-causing microbes), which typically thrive in dark, low-oxygen environments. Complete disinfection with conventional methods is pretty well impossible.

A more effective method uses ozone, but the effect is temporary. As Dr. Marvin has noted,

After that first year, bacteria finds a way back into the tubes. These bacteria can change from aerobic to anaerobic bacteria. Since there’s no blood flow after filling the root canal space, there’s no way for the body to fight these bacteria. They produce toxins and can release these toxins out of the root (although not through the root canal).

You also have to consider what’s happening to the bacteria surrounding the tooth root and in the bone. People, including dentists, forget about the tissues surrounding the tooth, instead focusing on what they can see, the teeth. These infections are sometimes more harmful than the bugs in the dentinal tubes. The abscess or infection in the bone can get into the bloodstream and travel elsewhere. It can also cause disturbances in the meridians (causing problems in distant organs).

Over the years, Dr. Rehme has submitted hundreds of our patients’ extracted root canal teeth for biopsy. Almost invariably, the results showed each carrying a heavy toxic load. It’s important to remember that these toxins aren’t just the original pathogens that made the tooth so diseased that RCT was deemed “necessary.” They are metabolic byproducts generated by those pathogens – their waste material. “It only makes sense,” Dr. Rehme has noted here previously,

that, if this toxic condition is present inside the tooth, it certainly has the potential to spread to other parts of the body. This would operate in the same manner as the well-established linkage between periodontal disease affecting the health of one’s body.

(For a thorough discussion of these toxins, see this article by longtime biological dentist Dr. Gary Verigin.)

Whether and how they will affect one’s health depends on a number of factors, including the health of the patient’s immune system and biological terrain, and their overall toxic load. A healthy person may be able to tolerate the root canal for a very long time. Others cannot.

Yes, root canal therapy may “save” a tooth, but as Dr. Rehme says, this “may not be the only solution if it means compromising the overall health and wellness of the patient.”

We will be taking time off from blogging for the holidays and will be back to our regular (Wednesdays) posting schedule on January 7.

All of us here at Dr. Rehme’s office wish you and yours the happiest of holiday seasons!