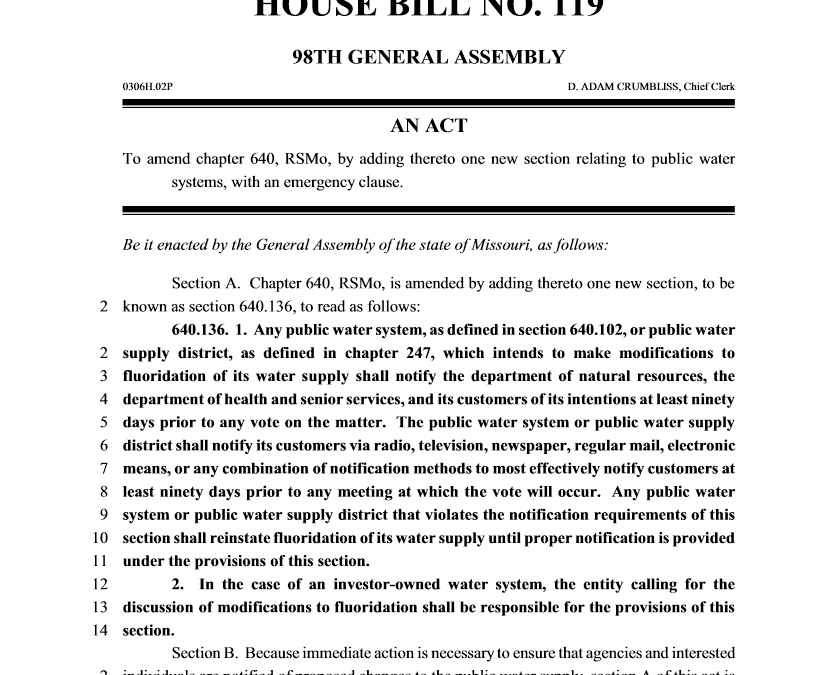 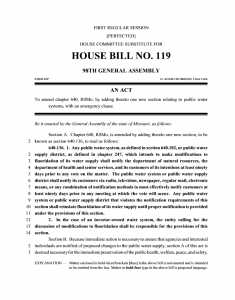 When Representative Donna Lichenegger first introduced her fluoride notification bill to the Missouri House of Representatives a couple years ago, it failed to make it to the floor for debate.

So last year, she re-filed it. The bill made it out of the Senate Committee but failed to get final approval.

Simply, the bill would require all public water systems and water supply districts in the state to give 90 days notice of any fluoride modification votes to the Department of Health and Senior Services, the Department of Natural Resources and customers. You can read the full text of the bill here and follow its progress here.

On the face of it, this bill seems innocuous enough. But Lichtenegger’s comments suggest it may be more about blocking future efforts to end this overly blunt practice done in the name of public health.

“There are some people who don’t like fluoride, and then we have people who take it out of the water system because they see it as a cost,” Lichtenegger said. “The problem is that when you do that, then the cost is really big, especially for children, but for some adults, too, with periodontal disease, because you really need the fluoride for certain dental diseases.”

By the same token, there are big costs in terms of systemic health effects. As one research review in the Scientific World Journal put it,

Fluoride has modest benefit in terms of reduction of dental caries but significant costs in relation to cognitive impairment, hypothyroidism, dental and skeletal fluorosis, enzyme and electrolyte derangement, and uterine cancer. Given that most of the toxic effects of fluoride are due to ingestion, whereas its predominant beneficial effect is obtained via topical application, ingestion or inhalation of fluoride predominantly in any form constitutes an unacceptable risk with virtually no proven benefit

There’s also the cost of all the continued legal wrangling. As even a former chair of the pro-fluoridation British Dental Association has argued, continuing to push fluoridation where it isn’t wanted is a waste of “precious time and resources.” (A lack of fluoridation, he added, “might not be so bad.”)

And it’s not as if fluoride is the only defense we’ve got against dental disease – and fluoridated water, the only way to get it. What about teaching and nurturing good oral hygiene? What about improving access to dental care? What about reducing sugar and other hyper-processed carbs in school meals, and taking other educational and policy approaches to improve the quality of diet?

Yet, in the mainstream, “prevention” remains largely all about fluoride (and as we saw last time, there are reasons for this) – even as tooth decay remains the number one chronic disease for children. Though more than two-thirds of the US population receives fluoridated water, about 25% of preschoolers develop caries (cavities), as do about 60% of teens.

Clearly, we can do better.

As for the bill, one thing is for certain: Whether it becomes law or not, there will be many who will continue to say no to fluoridation and demand better – from our elected officials, our dentists and ourselves.

For more on fluoridation, see IAOMT Policy Position on Ingested Fluoride and Fluoridation