How Secondhand Smoke Can Damage a Kid’s Teeth

For Valentine’s Day, the American Academy of Pediatrics offers “14 Ways to Show Love for Your Child,” with tips ranging from positive talk to remembering to say “I love you” to providing healthy meals. But we thought of one they missed: Giving them a smoke-free environment. 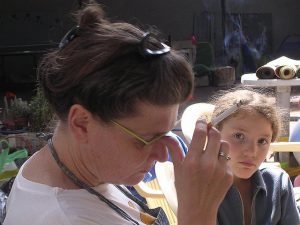 Unfortunately, smoking is still prevalent here in the US – not to mention a major problem in developing countries – despite the consequences: gum disease and tooth loss, emphysema, asthma, heart disease, stroke, cancer, and, the final kicker, death. Kicking the habit can only improve your health.

And perhaps surprisingly, it may even improve your kids’ dental health.

Research continues to suggest a relationship between secondhand smoke and caries (tooth decay). For instance, one recent study in the International Journal of Environmental Research and Public Health found that “family history of smoking” was one of several causes strongly associated with caries risk in toddlers.

Childhood caries were more frequent in children who lived with family members who smoked than children who lived with family members who did not smoke…. A recent systematic review has confirmed the association of secondhand smoke with early childhood caries . In an in vitro study, environmental tobacco smoke exposure increased the growth of cariogenic bacteria (Mutans streptococcus) that can convert carbohydrates into acids. Kohler found that early colonization by Mutans streptococci lead to higher caries prevalence in children at age 4.

And there’s more research beyond that.

A study in Archives of Oral Biology found that young children exposed to secondhand smoke had more caries than those raised in nonsmoking environments. They also had higher counts of decay-causing pathogens and more acidic conditions in their mouths (perfect for fostering decay).

A 2011 study in Caries Research found that existing cavities expanded when the patient was exposed to cigarette smoke.

A 2014 study in BMC Pediatrics found that “toddlers whose mothers smoked five or more cigarettes/day during pregnancy showed a higher caries severity level respect to those whose mothers did not smoke. Environmental exposure to smoke during the first year of life was also significantly associated with caries severity….”

Some suggest that more research is needed to determine whether the higher rate of caries is directly caused by secondhand smoke or the product of other factors, of which cigarette use in the home is a marker. For instance, authors of a 2011 review in the International Journal of Environmental Research and Public Health noted that socioeconomic factors might be in play.

The most straightforward explanation of the relationship between secondhand smoke and dental caries is social inequality. Enamel defects were associated with development of early childhood caries in a population with low socioeconomic status… Secondhand may be a marker for unhealthy choices in diet and oral hygiene practices. However, the association between SHS and childhood dental caries was still significant after adjustment for variables of SES and other related factors.

Compared to cancer, cavities may seem almost insignificant, but dental caries, especially if untreated, can lead to greater problems, including tooth loss, systemic infections and even, in rare cases, death. Cavities in baby teeth may also lead to long-term problems in adult teeth.

Yet some will continue to smoke anyway. It’s a tough habit to break – perhaps the toughest. If you do smoke, be thoughtful of others. Ask adults for permission before you light up, and never smoke near children.

Find out more about other risks of secondhand smoke and how to protect your family:

Resources to Help You Quit Smoking