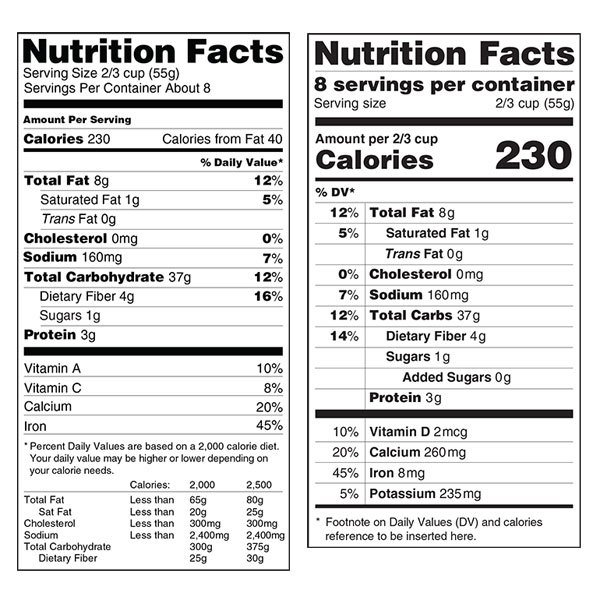 Last year, the FDA proposed some changes to the Nutrition Facts label – the first in more than two decades. One of those changes would add a line showing the amount of added sugars.

This past Friday, they announced a proposed “daily value” for added sugars, as well: 10% of a person’s total daily calorie intake.

The FDA proposal would be based on that number, meaning that added sugars should be no more than 200 calories, or about 50 grams, in a recommended daily diet of 2,000 calories.

So if a food label says something has 50 grams of added sugars, the percent daily value for added sugars would be listed as 100 percent.

That’s not bad. It would definitely give a clearer view of a product’s extra sugariness. For now, you have to look to the ingredients list and scan for all the variously named sugars that routinely go into hyper-processed foods.

That said, the daily value could be even lower. Although that 10% max is what the World Health Organization currently promotes for good health, they also recommend a target intake of just 5%. Research published last year suggests that for good oral health – to prevent caries and gum disease – that intake should be even lower.

[The research team] found that adults had a significantly higher incidence of tooth decay than children, and this incidence soared with any sugar consumption over 0% of total daily calories. But even among children, the team found that moving from consuming almost no sugar to 5% of total daily calories doubled the rate of tooth decay. This rose with every increase in sugar intake.

Consequently, they called for a target value of just 3%. For a 2000 calorie diet, that’s just 60 calories, or 15 grams of added sugar. That’s a little more than a cup of bottled marinara sauce or just over 2 tablespoons of honey barbecue sauce.

We use those examples deliberately, as it’s so easy to overlook such “inconsequential” sources of added sugars. For most of us – even those of us who eat a diet based mainly on whole foods – do use processed products at least some of the time, at least for things that are hard or time-consuming to make from scratch at home. And organic, non-GMO products can be just as sugary – sometimes even more so – than their conventionally produced counterparts.

Anyhow, to no one’s surprise, the manufacturers are none too pleased with the possibility that they’ll need to more plainly disclose the sugar content of their products at all – let alone that a max value will be assigned to it. They began grousing about it early and often, though generally through talk about concern for the consumer. “Sugar is sugar,” they say, which is true so far as it goes.

And total sugars are included on the current label. If added sugars come to be shown, they’ll still be there.

But according to industry, this will “confuse” consumers.

So presumably, the concern is less with giving objective data – grams of added sugars – more with how that information will be used.

Meanwhile, they hold forth their own industry-funded research that “proves” how confusing the new labels would be. Witness the industry-funded study just published in the Journal of the Academy of Nutrition and Dietetics (an organization notorious for its financial ties to Big Pharma and its cozy partnerships with food companies):

NFP [nutrition facts panel] changes that are intended to clarify product nutrition facts may have the unintended consequence of causing misinterpretations of the label information. In this analysis, rather than improving consumer understanding about the amount of total sugars in a product, NFPs with “Added Sugars” declarations were misleading and the resulting misperception influenced purchase intent.

Translation: They’ll buy less, and our profits will go down.

Also be sure to read Dr. Robert Lustig’s powerful essay “Sugar in Food Is Poorly Labeled, and the Industry Likes It that Way” over at the LA Times – or view his presentation on “Sugar: The Bitter Truth.”