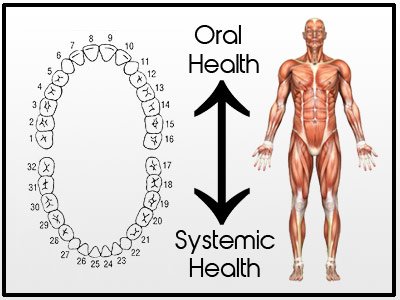 One of the big challenges of gum disease is that it’s easy to overlook symptoms until the disease has progressed quite a bit. There’s typically no pain, and even tell-tale signs such as puffy gums or blood when you brush and floss aren’t apparent in every case.

With nothing screaming, “Hey, you’ve got an infection going on in your mouth!” it can be easy to think that skipping the floss or interproximal brush is no big deal. Where are the consequences, right?

They happen later. Dentally, it can mean tooth loss. But it may also raise your risk of any number of systemic illnesses.

So if you need a little motivation to keep up with your oral hygiene and other healthy habits, just take a look at this list of some of the systemic health problems that scientific research has linked with gum disease:

Of course, in some cases, the relationship has only been observed. In others, stronger evidence has linked gum disease with other conditions marked by chronic inflammation.

While much research remains to be done, it’s clear that the relationship exists. Consequently, mainstream dentistry has finally begun to re-evaluate the focal infection theory that it has spent years dismissing as so much nonsense, in spite of the evidence.