The Role Your Oral Health Plays in Aging-Associated Disease 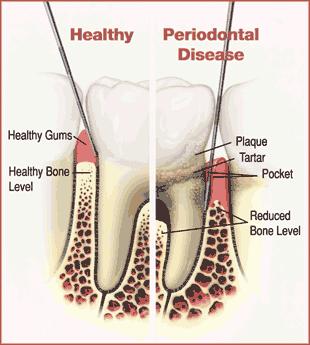 Alzheimer’s, heart disease, cancer – conditions like these don’t just crop up overnight. Genetic predisposition in a lifetime of environmental exposures and lifestyle choices all play a role in the dynamic of illness. Poor choices that don’t seem like a big deal when you’re young have a way of catching up with you.

And this is as true for oral health as systemic health. After all, the two are connected. Periodontal (gum) disease, for instance, has been linked with a wide range of inflammatory conditions, including Alzheimer’s, heart disease, diabetes, stroke, rheumatoid arthritis and kidney disease. 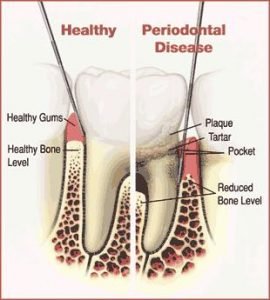 Yet often we forget just how important perio health is – which may be another reason why gum disease is the 6th most prevalent health problem in the world. If we don’t think about it, we don’t do much about it. Most Americans – up to 75% – have periodontal disease to one degree or another. The older you are, the more likely you’re in that majority.

And bleeding gums – the most common symptom of gum disease – are just the start. As the disease progresses, the normal space between the teeth and gums (the sulcus) gets deeper. These “pockets” become perfect little harbors for bacteria and other pathogens to proliferate: dark, wet and low-oxygen. The immune system goes on red alert to fight the infection. Unless treated and successfully managed, the disease process ultimately breaks down connective tissue and supporting bone. Eventually, teeth will loosen and come out.

Thus, as an article published a few years back in the Annals of Long-Term Care put it,

Oral hygiene is not a cosmetic concern. Oral disease, particularly periodontal disease, represents a wound the size of a person’s palm. Periodontal pathogens and bacteria that cause dental caries have been found in amniotic fluid, vascular plaques, and the lungs. As a biofilm grows on the teeth, it acts as a breeding ground for more than 500 pathogens, which release VSCs [volatile sulfur compounds, which are released as gum tissue dies]. These pathogens or the VSCs that they emit can be aspirated or enter the bloodstream, contributing to chronic health issues, including respiratory diseases, cardiovascular problems, and impaired cognition. [emphasis added]

Through recent research, we’ve been coming to see how Alzheimer’s may be triggered by far more than just the “hallmark proteins” originally suspected. Writing last year in the Journal of Alzheimer’s Disease, researchers noted how our old understanding of the disease is

expanding to include the role of infections, lifestyle, and genetic and environmental factors in the pathogenesis of AD [Alzheimer’s disease]. Periodontal disease (PD) typifies a condition that encompasses all of the above factors including pathogenic bacteria. These bacteria not only are the source of low-grade, chronic infection and inflammation that follow daily episodes of bacteremia arising from everyday tasks such as brushing, flossing teeth, chewing food, and during dental procedures, but they also disseminate into the brain from closely related anatomical pathways.

Over the long haul, the resulting chronic inflammation damages the brain in susceptible individuals.

And the tale is similar with other inflammatory conditions, as we noted with respect to diabetes a while back. Research published just last month in the Brazilian Dental Journal documented the relationship between cardiovascular (heart) disease, periodontal disease and mortality in elderly patients. Those with poor gum health were more than twice as likely to die by the end of the study than those with healthier gums.

Treating periodontal problems becomes a critical part in treating the systemic illnesses they contribute to. This typically means ramped up hygiene, nutritional improvements, appropriate supplementation, and regular deep cleanings that include ozone.

But not only can gum disease be treated effectively, it can be prevented – starting when you’re young. For the truth is, even conditions we think of as only affecting older people can affect a person earlier than you might think. According to the Alzheimer’s Association, for instance, up to 5% of Americans have early onset Alzheimer’s – “early” meaning before the age of 65. The American Heart Association calls “I’m too young to worry about heart disease” as the number one heart health myth.

As early as childhood and adolescence, plaque can start accumulating in the arteries and later lead to clogged arteries. One in three Americans has cardiovascular disease, but not all of them are senior citizens. Even young and middle-aged people can develop heart problems – especially now that obesity, type 2 diabetes and other risk factors are becoming more common at a younger age.

If you’re already suffering from periodontal problems, it’s not too late to restore balance and health to your mouth. No, it won’t cure all your ailments, but your body will have one less battle to fight. That’s worth a lot.